Call Us Today! 888-935-4866|drbill@vomtech.com
Previous Next
Chiropractic and Cats

Veterinary chiropractic care in the feline exists very much like cats exist in society, that is, detached and seemingly coming from another planet. Certainly all the disease conditions that we see in the canine are present in the feline but with several very important “additions”.

These “additions” are found to be the major reasons a cat lover would present their pet to a veterinary chiropractitioner. These syndromes represent some of the easiest and the most difficult conditions to treat in the whole of chiropractic application to animals. 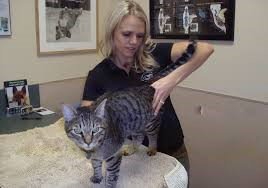 The case of Jack the cat. How VOM chiropractic method helped him?

The cat that presents with a neck twisted to the side or more commonly down and to the side is the “easy fix” that we kitty chiropractors are always hopping to get. These cases usually respond quickly and with few repeat visits. In some cases a single adjustment may be all that is needed to restore complete and permanent function.

Usually due to an acute injury, the cat that presents with this syndrome cannot lift its head up well or keeps it tucked down and to one side. An injury such as falling off furniture, a tree, or just rough play with a sibling can create a subluxation of the first and second cervical vertebrae that will create immediate or delayed symptoms. The owner may complain that their cat woke up one morning with a kink in his neck and hasn’t been able to run or jump properly for weeks to months. These cats often present severely compromised:

“Jack” the cat appeared on my exam table after he had been to three other vets who had not been able to isolate the source of his inability to walk straight, jump up on the couch and lift his head up to look at his owner.

His owner was frustrated and continually complained about the veterinary cost that he had incurred. “If I have to spend one more dime on that damned cat I’m gonna take it out and shoot it in the head!”, was his lament, designed to induce me to keep costs to a minimum. The owner failed to realize that he had his cat at the “kitty chiropractor” and his very presence at such an eclectic and unique approach to veterinary health care, defined him as a class “A”, number one client, willing to do everything necessary for his beloved pet.

Now this doesn’t change the way we work up the case or what it costs, it’s just an amusing dance that goes on between vet and client that plays out before they both decide to get busy and fix the problem. Jack could not lift his head up and to the right and could not advance his right leg forward enough to walk naturally. His x-rays showed nothing, which was why he was not treated by the previous veterinarians. He had been this way for two months.

Upon examination and adjustment Jack’s subluxations were the kind that one adjustment “unlocks” the whole case. One quick and easy motion to the right neck area at the wing of the atlas, directed toward the opposite ear, and Jack’s atlanto-occipital subluxation was reduced for good and all that was left was the rehabilitation phase that took 1 week. Jack was jumping up to the top of the refrigerator (his favorite warm spot) without hesitation. Jack’s “dad” had to pay me for an office call and a recheck.

These “hitch in the neck” cases in the feline are the ones that make the veterinary chiropractitioner look really good and respond very fast. They can be very embarrassing to the referring vets that cannot find the problem on x-ray or examination.

The cat has a unique reflex that has been noticed by clients and veterinarians alike. It is an odd reflexive twitching , head jerking or licking behavior initiated by stimulation over the lumbo-sacral area of the back.

Often this reflex can be fired off by light touch to the back as in petting so it is noticed commonly. The threshold of activation of the reflex can be so close to firing off due to subluxation irritation, that any stimulation will easily create this response. At times, just holding a hand over the back of the cat and not even touching the skin or hair will fire off the reflex.

This skin-spinal reflex pattern can look like a seizure or a licking spasm directed to the cat’s foreleg or shoulder and is the source of much confusion for practitioners who look for a problem in the front of the pet when the condition lies in spinal nerve root inflammation in the lower back vertebrae.

“Ziti”, a 10 year old spayed domestic shorthair presenting to my clinic with an unexplained seizure condition, was one of these skin-spinal reflex cases.

When you touched Ziti on her lower back, she would scream with her disapproval and whip around to find something to sink her teeth into. The owner said that she never liked having her back touched and would not allow petting. That was just the way she was.

Ziti also walked with a bit of a limp on her left rear and had a chronic dermatitis on her back in the area that the reflex was the most intense. Many of these cases have this associated dermatitis and it has been thought that the two are different manifestations of the same disease. The skin-spinal syndrome can then be confused with flea bite allergy and other skin disease. It is thought that the subluxations that are associated with the syndrome create a numbness or an irritation sensation in the skin that serves to induce skin disease or create self-trauma by the cat. Thus the skin-spinal nomenclature.

Ziti did not like to be touched or adjusted in the area of her lower back and she was not shy in letting anyone who tried find that out. My heart goes out for these pets in that they have had to endure a severe burning itching numbness for years. Anyone who approached that area on their backs would do so at their own peril.

X-rays and examination showed subluxations at the 2nd, 3rd, 4th, and 5th lumbar vertebrae and had been that way for many years. Reduction of these subluxations over the next few days would give Ziti immediate relief and obvious reduction of the tell-tale reflex.

Ziti was adjusted weekly for 1 month and at the end of that time she could be petted by anyone and was even found to be purring for the first time in her life. She could walk and jump without problems and she appeared on the road to recovery.

This condition is one of the few in feline chiropractic care that responds slowly. It can take monthly adjustments up to 1 year to get a solution, as opposed to the 5.75 adjustments per case seen in canine cases.

Ziti’s pain and skin condition resolved completely within one year and did not recur.

Cats are easier to adjust than people or dogs.

The classic human and canine subluxation syndrome exists as a problem in the lower back or lumbo-sacral region. Cats also have similar injuries and clinical signs associated with these subluxations. Most often, reluctance to jump up onto bed, couch, or climb stairs is seen as a clinical indicator.

Cats are usually much easier to adjust than people or dogs. These subluxations often resolve within two or three adjustments and seldom return.

It is my belief that cats are easier to adjust than dogs because their bones are straighter, their vertebrae are easier to position and have longer bodies relative to their width. Also their joints are more mobile and chiropractic contact points are easier to find.

“Buster” a five year old neutered male burmese would crouch at the base of the sofa and prepare to spring into the loving laps of his owners and would pause as if to contemplate a potential shooting pain that would ensue if he did so. Buster would then slink off to lie on a favored spot on the floor. Lack of rear leg strength is often the owners complaint L-S subluxation.

Within the 3-5 adjustments that are needed to solve the problem, the clinical signs fall away in the first two weeks. These cases are usually quick to reduce and solve however they may recur again during the cat’s life.

Buster presented again twice within the next five years and it was my contention that the owners discontinued scheduled adjustments before his cycle of healing was completed. Buster was clinically fine but his healing was not completed.

Towards the back or bottom of the neck area (caudal cervical), the neck is forced to absorb all the stress of the body’s motion relative to the mass of the head. This places an inordinate amount of strain on the vertebrae in the area of the 5th, 6th, and 7th cervical vertebrae. Even the relatively small mass of a cat’s head, will over a period of time will predispose the joints of the neck to subluxations. Rough play with a litter mate or a sibling is also considered contributory.

“Bitsy” , a five year old, 18pound, spayed female domestic short hair that waddled when she tried to walk, was anything but “bitsy”. Bitsy presented with a very unique gait to say the least. She was today, not waddling, but walking on her shoulders and chin. That’s right, she was pushing herself around with her rear legs only, and her front legs were held out straight, dragging behind her. It was almost comical if it was not so sad. She was happy and seemed to be adjusting well to her sudden infirmity that occurred almost over night and illustrated no external signs of trauma. Bitsy was in trouble.

For this syndrome to occur, there could be no doubt as to where the problem was located. Spastic paralysis of the front legs while leaving the rears untouched had to be a lesion in the caudal cervical area and on the dorsum or top of the spinal cord.

It could have been a tumor that was compromising the spinal cord at that point, but since it occurred over night, I hoped it was a subluxation that could be treated.

I asked the owner how long Bitsy had been walking around like a wheelbarrow and she told me it had been over a week. Perhaps she thought the condition would go away at any moment. Bitsy seemed resigned to her “new slant on life” but I realized this would soon take this cat’s life.

Bitsy’s subluxations were treated and the next day she was able to stand and walk. This condition in the canine almost always causes the rear legs to become involved also and the whole animal is down, not just the front. Three weeks later, Bitsy was her old self again, waddling around the house on a direct line from her food dish to her favorite perch surveying her front yard from the comfort of her warm house.

The technique that I employ in adjusting cats is one I’ve developed and used on all domestic animals since 1983. In over 45,000 adjustments, I have yet to injure an animal and the number of lives saved with this technique is truly the one major accomplishment I have made in my life.

Using a hand-held device called an Activator™, an instrument developed by Arlan Furh D.C. of Activator Methods, I can quickly and easily reduce virtually any subluxation in the domestic animals and especially cats.

The Activator uses a small mass coupled with an incredibly fast pulse of motion of that mass to effect an adjustment. The small mass of the instrument cannot cause a torsional or mechanical stress of muscles, nerves, or other soft tissue. It is totally safe!